Here at Shepherd Song Farm, we think that appreciating the whole animal–any animal, is a good thing. In our modern day, mostly we want tender, lean cuts that are easy to cook, with no fuss.

There’s nothing wrong with cooking what you like, but roasted lamb chops, delicately carved saddles and tenderloins are only part of a whole creature, and in order to make more of the cuts everyone wants, it’s good to appreciate different parts. Most parts like liver, kidneys are hearts aren’t a hard sell for us (thank you!) but we do offer other parts too, other offal off the beaten path. Lamb fries, along with sweetbreads, are two good examples of different offal you might try and experiment with. Historically, too, organs were often prized more than other meats, due to the short shelf life, and high nutrient density.

Lamb fries, or testicles, aren’t generally sold in many places. Just like kidneys and liver, they’ll have a more pronounced flavor than other, milder offal like tongue and hearts. So, if you’re curious, if you’re brave, Chef Bergo, (an offal specialist chef trained in whole animal butchery) has something special for you to try: smoked lamb fries.

Admittedly,  chef was a little skeptical at first, having memories of strong-tasting wild boar testicles, but using a few tricks he uses with game meat, we can just about guarantee that these smoked lamb fries will fool even picky eaters into thinking they’re a kind of smoked ham, especially served on a cracker with salami, cheese, pickles, and mustard, of course.

The secret is in soaking the fries. Brining in saltwater, or soaking meat in milk is often used with things like livers and kidneys, especially from ruminants like deer and game animals that can have varying flavors and aromas depending on their seasonally changing diet. The liquid helps draw out some flavors, and allows you to add others of your own, if you choose. Corned beef, even though it isn’t offal, is a great example, since it spends an extended amount of time in a brine, it has more time to soak up aromas and flavor from pickling spices in the liquid. With the smoked lamb fries, chef layers subtle flavors of brine with a smoked taste everyone loves for a really special, nose-to-tail experience. 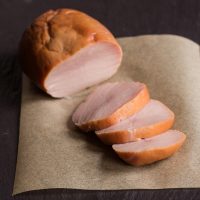