Tender pieces of grass-fed lamb or goat shoulder, with a big, bountiful mix of vegetables in broth make a rich, healthy meal. The lamb or goat meat stew recipe is called Hotch Potch, and it may sound like a children’s game, but it’s actually a traditional Scottish vegetable stew featuring lamb or mutton. In this goat meat stew recipe, Chef Alan Bergo uses lamb shoulder, but many other slow-cooking cuts like goat meat could be used too.

Chef Bergo discovered an old recipe for Hotch Potch and decided to create a modern version that still keeps the basic principles of the original. In times of food scarcity, the lamb or goat meat stew recipe could be made with garden vegetables that were available, but also wild vegetables that one could gather, specifically wild onions, lovage, and nettles.

As a forager, Chef Bergo is no stranger to wild, edible plants, but to make things approachable, and possible for home kitchens, he features only one wild ingredient: nettles, along with a selection of vegetables you might find as Spring changes to early Summer. Chef Bergo uses edamame, fava beans, lettuce, asparagus, spring onions, and turnips in his version, but you should feel free to use whatever is on hand, and very fresh.

Yield is enough to serve 4 as an entrée.

This recipe is by chef Alan Bergo. A chef from Minnesota, Alan is a veteran of the culinary industry, former executive chef of Lucia’s, and the Salt Cellar. Founder of the website Forager Chef, he’s best known as an authority on cooking with wild food. Learn more about Chef Alan, and his hunt for mushrooms, wild and obscure foods at Forager Chef. 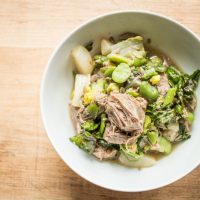 Many different cuts can be used to make this dish. Historically it was likely made with bone-in lamb meat.