Goats produce less meat proportionately than a cow or a pig, but they’re also the most widely consumed animal in the world. Butchering into small, bone-in pieces is the most efficient way to portion a whole goat, as well as the most ancient. The whole process can be done with a single knife or cleaver, by anyone. This goat meat stew recipe is a great example of how the bone-in pieces are used, it’s a slightly spicy, comforting stew, with a cultural use similar to chicken noodle soup in the United States.

You can get the spices at local markets that sell African food, but they’re easy to find online too. There are also lots of pre-made pepper soup spices online, but all the ones I tried were hit and miss and stale from overstocking. This goat meat stew recipe tastes better after it sits for a day and the flavors meld.

Since the bone-in goat meat pieces can be a combination of cuts from different places on the animal, there will be small pieces of bone. I like to use a spoon and fork combo to pick around the bones. Eating slowly also helps to appreciate things more.

Here’s a little tutorial on how I cook this goat meat stew recipe. It works well with either bone-in goat or lamb meat.

This recipe is by chef Alan Bergo. A chef from Minnesota, Alan is a veteran of the culinary industry, former executive chef of Acclaimed Lucia’s Restaurant, and the Salt Cellar. Founder of the website Forager Chef, he’s best known as a respected authority on Midwestern foraging. Learn more about Alan and his hunt for mushrooms, wild and obscure foods at Forager Chef. 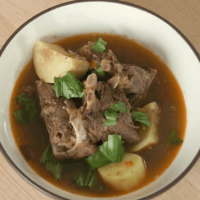