Hotch Potch or harvest broth is an “old-timey” recipe for a traditional Scottish lamb stew dating back to the 17th century. It is adaptable to most vegetables such as in this recipe turnips can be used instead of radishes or green beans instead of asparagus. Check your local farmers market for in-season or heritage vegetables.

A variety of legumes are traditionally included such as fava beans, edamame, chickpeas and green peas. It is really up to your taste, imagination and available produce. Nettles are common in the older recipes to supplement limited vegetable availability especially in the spring. If you care to forage and collect some nettles, clip off just the tops. A bit of fresh mint added at the end provides a magical touch.

The video demonstrates how to remove the bone from the cooked meat and prepare the meaty jus broth — a natural way to enhance the flavor of meat dishes.  Enjoy chef Alan’s adaptation of this traditional recipe using our delicious grass-fed lamb, goat stew meat, or shoulders!

Serves 4 as an entrée, with an extra serving or so for hungry eaters or leftovers.

This recipe is by chef Alan Bergo. A chef from Minnesota, Alan is a veteran of the culinary industry, former executive chef of Lucia’s, and the Salt Cellar. Founder of the website Forager Chef, he’s best known as one of the most respected authorites on wild food in the United States. Learn more about Alan and his hunt for mushrooms, wild and obscure foods at Forager Chef. 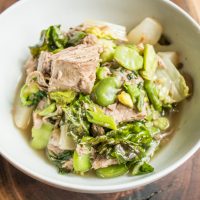 This recipe used a 3-3 1/2 lb shoulder. Expect some variation in size. Lamb stew meat or leg can also be substituted.