A traditional lamb plov, or pilaf made with lamb or goat meat is a great recipe to add to your repertoire. Typically it’s thought of as a dish from Uzbekistan, but similar versions are enjoyed in many areas of eastern Europe, the Middle East, and the Balkans. Just the word pilaf might sound a little uninteresting, but, plov, is anything but a typical pilaf. Chef Bergo researched and developed this plov especially for us, here’s what he says:

“I didn’t know what to expect at first, but the lamb Plov is probably the ultimate rice and meat based dish. Just imagine rice cooked with fork-tender braised meat in it’s own broth, heavily spiced, but not obnoxious, studded here and there with tiny tart barberries, although cranberries can also be used.” “Trust me, this is essentially the National dish of Uzbekistan for a reason-my family members fought over  the leftovers every time I made it while I was developing the recipe”.

The ingredients for our lamb plov are very simple, with nothing more than some rice, a few spices, lamb, carrots, and onions. The barberries are traditional, and add a great, tart flavor, but will probably need to be ordered online (Chef used these) you can substitute dried cranberries, but they will probably be a little more sweet than barberries, as they’re typically soaked in syrup. If rich meat and dried fruit doesn’t appeal to you, don’t worry, the dish will be just as good without any fruit at all.

The only real trick to getting the plov right is the special technique of steaming the rice. It’s different than how you may have cooked rice in the past, but it’s a fascinating cultural technique, that, once mastered, could be applied to plenty of other dishes. It’s fairly straightforward, you braise the lamb and vegetables, then add the rice, but do not stir. Next the rice is brought back to a simmer for a few minutes, then small tunnels are made with a skewer to help air circulate, and the whole pot (preferably cast iron for it’s heat retention) is wrapped in towels and allowed to sit off the heat and steam. After the rice is tender, the pilaf is turned out onto a platter for an impressive family style meal. 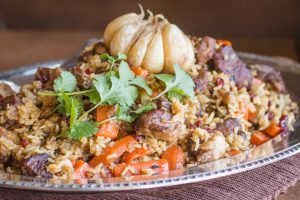 This recipe is by chef Alan Bergo. A chef from Minnesota, Alan is a 15 year veteran of the culinary industry, former executive chef of acclaimed Lucia’s Restaurant, and the Salt Cellar. He’s best known as a respected authority on Midwestern foraging. Learn more about Alan and his hunt for mushrooms, wild and obscure foods at his site Forager Chef. 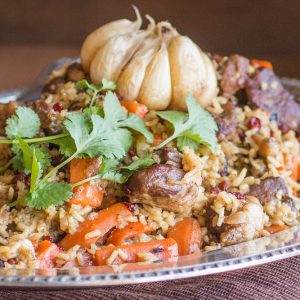 This is more complex and touchy than your average pilaf. Read the recipe and look and the pictures carefully before proceeding. Whole bone-in or boneless lamb or goat legs can be used instead of pre-cut stew meat, and are more economical. 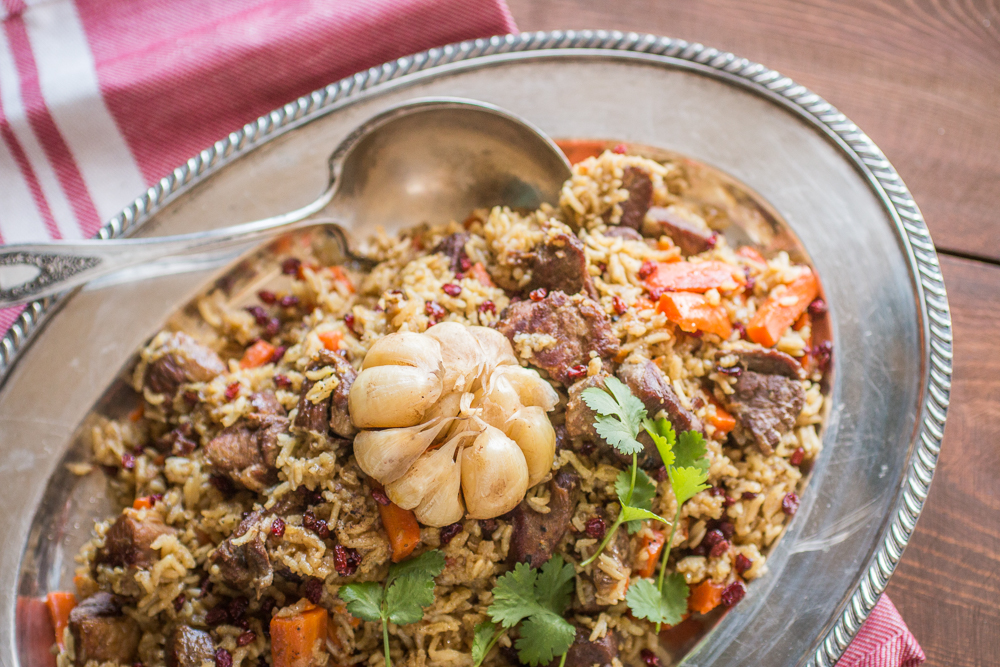