Kawarma is a traditional dish made from tender chopped lamb, typically served with hummus, but the origins of the recipe are much deeper and rooted in tradition. In the days before refrigeration, fatty pieces of meat would be salted, cut into small pieces, and then slowly cooked until the fat renders. After the fat was rendered, the meat would be preserved in it to cover. As long as the meat was completely covered with fat, no air, and with it, bacteria, could get in to spoil the meat. Similar processes, or preservation methods known as “air-exclusion” have been used around the world in various cultures.

During the season when there was no fresh meat, the pieces of lamb could be ladled out, cooked (which serves as an additional layer of sterilization) and served with a number of traditional dishes. Typically you’ll see references to dishes of the kawarma served with hummus, but another great version is shakshuka, or a type of spicy egg dish with tomatoes and hot chilis.

At home, you can easily make a small batch of kawarma with our grass fed lamb or goat, using some of our rendered tallow, or even substituting oil in a pinch. Tallow is preferable though, since it firms when cooled, allowing for the best air-tight seal after cooling and refrigerating. After slow-cooking in the oven, you can ladle out the pieces of slow-cooked, lamb, fry them a bit, and add to anything you like, but we recommend them with eggs, per chefs recipe, but doing a google search for kawarma can show you some additional ideas. Give it a try when you have some extra fat laying around! 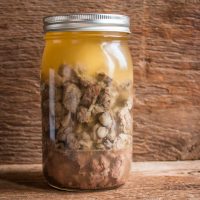