The lamb loin, also called a saddle, contains meat from the three most prized cuts, equivalent to the T-bone, Porterhouse and tenderloin in beef. The famous tenderloin lies protected under the backbone and is a very small strip. The loin meats are delicately marbled, with an elegant flavor that brings a note of luxury to any meal. The fat of grass fed lambs should taste clean and fresh.

In this recipe, the backbone will be removed (see steps in video) leaving the meat to be rolled and tied before grilling. The result is a very tender roast, easy to carve and with a minimal amount of fat. With no bones and a nice cylindrical shape, just slice as medallions and serve. It is perfect for any special occasion.

This recipe is by chef Ben Spangler. Hailing from Minnesota, Ben draws from his Midwestern roots to create dishes that are unpretentious and delicious. Ben has competed on national television for the Food Network and appeared on local Minneapolis food networks. He is currently executive chef at Mercy in Minneapolis. 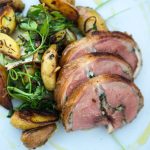