How to Cook Lamb or Goat Ribs

Everyone loves ribs, especially during grilling season. Lamb and goat ribs can be confusing if you haven’t worked with them before. Pork ribs are popular, widely available at restaurants, and even sold pre-cooked and packaged in grocery stores. People may expect a lamb rib to look and taste like flavorable, meaty pork ribs. Lamb and goat ribs are all of that, and more, as far as flavor goes.

The difference is especially true if you were to compare the baby back cut of pork ribs that is widely consumed in the United States with lamb or goat riblets.  There is no way around it: healthy animals have body fat and lamb and goat riblets are layered with delicious fat. They’re supposed to be. Fat from animals is arguably the most pure, natural, and healthy fat you can eat, especially from grass-fed animals high in omega three fatty acids gained from grazing on rich pasture, like ours at Shepherd Song.

Chef Alan Bergo loves lamb and goat ribs, and serves them regularly as an appetizer or entree. He has a secret to cooking with them though: rooted in how he learned to cook venison ribs.

This recipe is by chef Alan Bergo. A chef from Minnesota, Alan is a 15 year veteran of the culinary industry, former executive chef of acclaimed Lucia’s Restaurant, and the Salt Cellar. Founder of the website Forager Chef, he’s best known as a respected authority on Midwestern foraging. Learn more about Alan and his hunt for mushrooms, wild and obscure foods at Forager Chef.

Looking to buy lamb or goat for dogs? Shepherd Song Farm: Grass to table. We raise lambs & goats traditionally, humanely and sustainably. 100% Grass Fed, Pasture Raised, Never Confined, no Hormones, Grains or Animal Byproducts. Born, raised and processed in the U.S.A. Good for you and good for the environment.

“When I worked at Heartland Restaurant in St. Paul, we worked with only whole animals and eventually would build up different parts in quantities to sell. One of the kitchen-staff favorites were venison ribs, but guests were often scared to try them since they thought they would be fatty, and gamey. Even though they were mild tasting, as farmed venision is typically fed grains that mellows the flavor, we had better feedback from guests when we trimmed a little extra fat from the ribs before cooking.

A little trimming goes a long way, and as lamb and goats are more similar to deer in my mind than beef cattle, the method works just as well on their ribs too. Lamb and goat ribs, especially those from Shepherd Song, are kind of a chef’s secret to me, and an delicious appetizer that always get rave reviews, easy to serve for the cook, and a breeze to pass and eat with your hands as a canape”

To help guests discover how amazing lamb and goat ribs can be, Chef Bergo uses two extra steps during cooking: first, extra trimming of the fat cap, and secondly, after cooking and chilling, which helps the ribs hold their shape, he cuts the ribs into individual bones and grills or browns them to finish cooking. Both steps are vital in making the most delicious lamb rib in his mind.

Trimming the fat cap a bit helps to remove excess fat that can be rendered for all-purpose cooking, and cutting into bite-sized, single bone-pieces and browning helps render out even more fat before the guest actually takes their first bite. If you’ve been wary of lamb or goat ribs  try Chef Bergo’s method, we gaurantee you’ll love it. Did we mention that they’re the perfect appetizer too? The way we cut our ribs makes them the perfect size as an appetizer or entree, you can’t go wrong!

A note on cook times. Often at restaurants, sometimes even very nice ones, ribs are thougtht of as something you cook, and cook, and cook, until the meat falls off the bone. This is incorrect, and, if you brought ribs like that to a barbecue competition, you’d be docked points! Ribs should be tender and yield to the bite, but the bones should not slide out, which means they’re overcooked. Chef Bergo’s lamb and goat rib guide below will yield tender, but not overcooked lamb and goat ribs, and can be be done in a smoker, or in the oven.

One last tip, many people don’t even notice, and some like to eat it, but most of the time, chef’s will remove the membrane from the underside of the ribs before cooking so that it doesn’t interfere with eating the final product. It’s quick to do, and makes a more polished, final rib, but it’s optional. Here’s some pictures outlining the process. I don’t do this all the time, so if it seems difficult, it’s ok to skip. 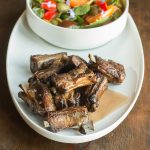 Chef's favorite rub for ribs is baharat seasoning, see a recipe for that here. Lamb or Goat Musakhan