I’ve been working on a series of recipes for Shepherd Song and did a version based on my favorite Argentinian style marinade, but I had a few extra tongues to play with so I tried out a couple other things too. I wanted to develop a dry cure that I could put on the tongues without having to fit a gallon of liquid in my fridge, since it’s already packed with meat. After two rounds of testing I have one that I like. It’s a blank slate for adding other ingredients or flavors, or it can be used all by itself because smoked meat should be about 2 things: meat and smoke.

When the tongues were cured, I wanted to smoke them. The only problem was currently I’m without a restaurant, and with it, the ease of telling my prep cook to smoke XYZ before I come into work. Thankfully my girlfriend has a great little fireplace, and I figured I could Macgyver an at-home, low-tech hot smoker. I’ve been planning on putting up a post on how to smoke things at home (without a smoker) and a couple recipes, so I’m not going to go too in depth here. The jist is: just because you don’t have an expensive smoker doesn’t mean you can’t have world-class smoked meat for your family at home.

If you have a smoker, you can probably smoke them a lot longer than I did here (about an hour) and they’ll eventually develop a nice smoke ring and be a lot darker in color. I had some farm tobacco that I’d dried and soaked. I added to the fireplace embers to add some oomph to mine as they were only going to smoke for a short amount of time since the fireplace was warm and would’ve dried out my tongues if I left them in all day. My advice: smoke your tongues however you like, with whatever you have available, necessity is the mother of invention.

This recipe is by guest chef Alan Bergo. Chef Alan Bergo is a veteran of the Midwestern culinary Industry. He was previously executive chef of The Salt Cellar and Lucia’s restaurant, as well as sous chef to Lenny Russo at St. Paul’s famed Heartland. Bergo is most widely known as an authority on wild Midwestern ingredients from his website  Forager Chef a culinary journal and resource, as well as worldwide network of foragers.

Tongues can be cured with a dry method, or with a brine solution. Depending on what I want to do in the end I may do either. Here’s a little tutorial on how I prepared them. It works well with either lamb or goat tongues. 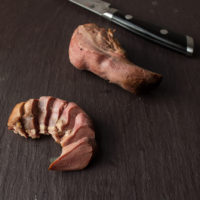 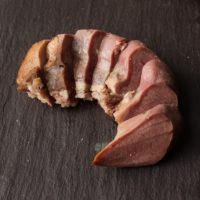