Once coveted as a delicacy, heart from an actual animal is now considered strange to some consumers— a piece of forbidden, alien meat we glance over in the frozen section, with ice crystals from the deep freeze re-enforcing our notion that no, no one eats that, and neither will I: Where are the steaks, tenders, and chops again?

When I was growing up, I was squeamish about eating heart, along with most other organ meats. But when I started cooking, I gradually came to appreciate both the ethical and practical value of eating the whole animal. I also began exploring the culinary potential of less popular bits, including heart. And, with experience, I grew to love and respect this meat’s unique properties.

We all want to share our passions and strongly held beliefs with others. And “eat the whole animal” is a tenet I believe in fiercely. But what I learned from experience is what most seasoned chefs already know: Heart is a very hard restaurant sell. And in a restaurant setting, the inability to sell heart can quickly translate into a lack of desire to cook it. This is true for home cooks, too, of course. Even the most inspired drive to creatively elevate and celebrate offal will quickly fizzle if there’s nobody to appreciate the results. To see beautiful hearts carefully prepped and served only to be pushed around a plate and later tossed in the trash is, well, heart-breaking.

Happily, there‘s one way to cook heart that’ll win over just about anyone: corning. Corning has a transformative effect on both the flavors and textures that are so often presented as organ-meat deal-breakers. After meat sits in a brine for a while and then gets thoroughly cooked, there’s a safe and comforting homogeneity to it. Everything gets soft, tender, and seasoned to a slightly salty perfection. So here, I’m going to give you my recipe for corned lamb or goat hearts. This method of corning is a great way to bring out the best not just in hearts, but in all sorts of other organ and muscle meats.

Amy Theilen uses corning to make bear-meat pastrami in Northern Minnesota, and my friend Hank Shaw uses the process for venison (as well just about as anything that flies). The possibilities are limitless. So, what do you make out of the corned heart you prepare? Since the meat has already been cooked, and the heart is lean, you don’t want to apply too much direct heat (so no grilling), but slicing and gently warming corned heart in a pan is great.

I love to make warm Rueben sandwiches out of corned heart. Here’s a simple recipe and video describing my process. This process will work with hearts from larger animals like pork and beef but will take longer to cure.

This recipe is by chef Alan Bergo. A chef from Minnesota, Alan is a 15 year veteran of the culinary industry, former executive chef of Acclaimed Lucia’s Restaurant, and the Salt Cellar. Founder of the website Forager Chef, he’s best known as a respected authority on Midwestern foraging. Learn more about Alan and his hunt for mushrooms, wild and obscure foods at Forager Chef. 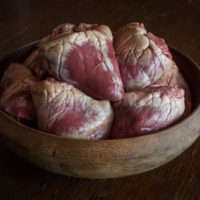