One of the most famous lamb sausages in the world is merguez: a spicy sausage flavored with a caramelized chili and spice paste called harissa. The sausages are originally from Northern Africa, but have also adopted by the French.

Our merguez, made with Shepherd Song grass-fed lamb or goat is easy to make at home, even without a sausage stuffer. Traditionally they’re stuffed in sheep casings, but Chef Bergo rolls his into small cigars when he doesn’t have casings, or if time doesn’t allow.

With merguez, it’s all about the harissa paste, and the very slow cooking of garlic, peppers, and spices until they caramelize, and change in flavor. Just like our recipe with Ras-al-Hanout, traditional recipes can include a long list of ingredients, but Chef Bergo shares a recipe for preparing a simple one on your own. Commercially made harissa paste is also available in just about any grocery store that has a selection of Middle-Eastern foods, however.

Since this is a lean lamb sausage, another important thing to know is that it should be left pink to help keep it juicy, but if you prefer your meat more done feel free, just know the texture may become crumbly.

This recipe is by chef Alan Bergo. A chef from Minnesota, Alan is a 15 year veteran of the culinary industry, former executive chef of acclaimed Lucia’s Restaurant, and the Salt Cellar. Founder of the website Forager Chef, he’s best known as a respected authority on Midwestern foraging. Learn more about Alan and his hunt for mushrooms, wild and obscure foods at Forager Chef. 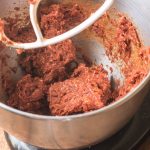 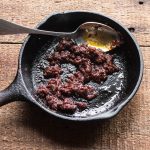