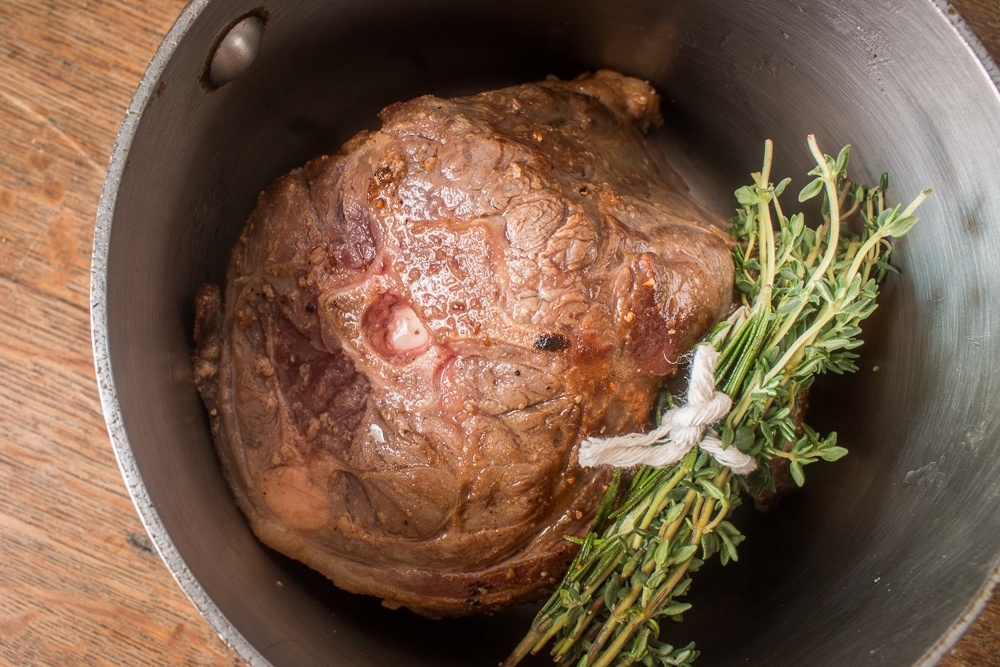 Confit, or highly seasoned meat cooked slowly in it’s own fat, is a classic French method of meat preservation dating back to times before we had refrigerators and freezers to preserve meat for the winter. The fat, and gentle cooking gives some of the most tender, succulent meat possible, which is why it’s still relevant and useful today, even though preserving meat outside of refrigeration, or in a cold root cellar, isn’t a necessity. If you’re at all familiar with confit, you’ll definitely want to try Lamb or goat neck confit.

Certain cuts of meat are preferable for making confit. In a perfect world, you want to use cuts best for slow cooking, things with  lots of connective tissue and intramuscular fat-the hard working muscles. With lamb, goat, and other ruminants like venison, shoulder is one of the best, and most commonly used cuts for confit, but neck is just as good, and is often an overlooked cut of meat.

After cooking in fat, confit was typically cooked again with beans or in stews, or made into rillettes, a sort of spreadable, shredded meat pate. Now days, chefs (and home cooks) serve confit in all kinds of ways, but some of the classic ways are still the best.

If you look online, making confit can be intimidating as it calls for a lot of rendered tallow. Rendered tallow will give confit with the deepest flavor, but originally the meat was cooked in tallow or lard since it would solidify after cooking, and form an air tight seal. If you’re making confit at home, and don’t have access to animal fats, it’s perfectly fine to substitute some cooking oil along with some animal fat, or in a pinch, even just oil, just don’t brag about it to a chef from France.

Another thing to consider with confit is exactly how much salt to use. Saying something like “season the meat liberally” can mean different things to different people, but using a scale to weigh the salt removes any sort of guesswork, and possible over-salting. Chef Bergo has made confit for years, out of many different animals. He recommends from 1.5% salt by weight. To find out how much to season our lamb neck, we take the weight in ounces, and convert it to grams. Our neck was 2.5 lbs, or 1120 grams. 1120 grams x .015 is 17 grams, or 1 heaping tablespoon of kosher salt.

After the confit is cooked, Chef Bergo recommends letting it sit under the lard for at least a few days, but it can be eaten right away. It’s excellent on top of cooked white beans and wilted greens, or save it to make lamb rillettes! 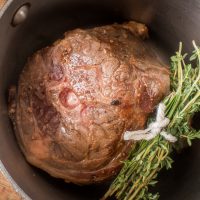 Many other cuts can be prepared like this. Shoulder is especially good. 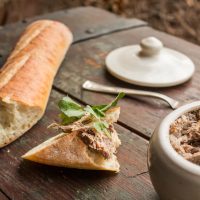 Rillettes are one of Chef Bergo's favorite things to make with finished confit, it's a sort of rustic pate or spread that goes well with anything. You can make the rillettes with any type of confit, from any cut on the animal. It's a very traditional recipe to make with confit, typically lamb shoulder is used.
Prep Time10 mins
Cook Time3 hrs
Course: Appetizer, Snack
Cuisine: French
Keyword: Confit, Lamb Neck, Rillettes

For the best results, make sure the rillettes are at room temperature so the fat is spreadable.