All workers and handlers should be quiet and calm. If dogs are used for moving sheep or goats they should be trained to stay at the edge of the flight zone and to reduce pressure when the animals are moving correctly. Working sheep or goats in confined quarters or allowing nipping or unnecessary barking should be avoided. Yelling and arm-waving excite and agitate animals. Every possible effort should be made to ensure that the sheep or goats are kept moving on their own without poking, prodding or shouting. If a group of animals balk at a smell or a shadow up ahead, be patient and wait for the leader to cross the shadow. There is usually no reason to touch or prod them as they will generally figure it out and move forward when human pressure is reduced.

Livestock will follow the leader and handlers need to take advantage of this natural behavior to move animals easily.

Calm animals are easier to handle and move than excited animals. As animals are being collected and moved keeping them within their known flock or herd helps lessen stress as this is their normal way to protect themselves from predators. When dividing groups an individual will stand more quietly and remain calmer if they can see another animal within 1 meter of them. Especially an isolated individual may lunge and become excited if they see herd mates moving away. Animals can become agitated very quickly, and it can require 20 to 30 minutes for them to become calm again. Livestock must not be rushed or run along alleyways, passageways or gateways. Calm animals will move naturally through well-designed systems with a minimum of driving and prodding.

Fear Signals: Bunching tightly is a fear behavior and makes it more difficult for a predator to single out a single animal. This is the same with milling and circling behavior. Dominant animals move to the middle and safest area of the tight circle and the weakest ones pace and mill at the outer edges of the circle. Milling animals are frightened and highly stressed and unpredictable.

To keep animals calm and move them easily, the handler should work on the edge of the flight zone. A flight zone is an animal’s personal safety zone. The size of the flight zone varies by animal breed, temperament, previous handling experience and angle of the handlers approach. When the handler increases pressure by penetrating the flight zone (within the circle to position A) the animal will move forward. When the handler reduces pressure by stepping back (to position B) the animal will slow down or stop moving. The handler can change the animal’s direction by moving around the circle towards the head of the animal. Deep penetration of the flight zone (into the shaded area) should be avoided. Animals may become upset and act unpredictably when a person is inside their personal space and they are unable to move away. They may challenge you or panic. Also notice and respect the animals blind spot represented by the V shape in the diagram directly behind the animals head. 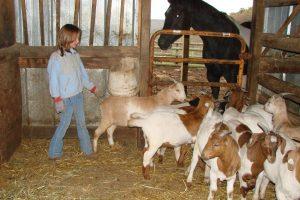 Encourage movement with non-electric driving aids such as flags, paddles and sticks with streamers. Animals can easily be turned with these aids. To turn an animal, block the vision on one side of its head with the aid. If the leader balks at the chute entrance, a single touch with the non-electric prod device may be all that is required. Once the leader enters, the rest of the animals will follow. 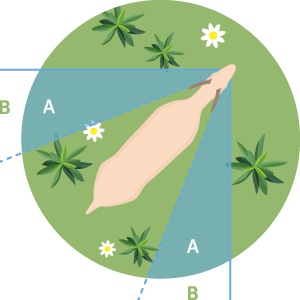 Wide Angle Vision: Wide Angle Vision allows sheep and cattle to detect movement behind them without moving their heads. This causes poor depth perception. They have a blind area in front of their nose and directly behind them. Staying within their vision generally is calming as they want to see where people are when they are being moved. Grazing animals are sensitive to body posture. They know the difference between someone on a horse and someone on the ground. Depending upon their experience one may be threatening and the other not. They are sensitive to body posture and know the difference between a stalking predator and one that is just walking by. Try not to move like a stalker. The more casual and relaxed the better. Remember your eyes send a message. All grazing animals interpret a hard stare as a threat. They are more willing to approach if you look down or to the side.