In the Spirit of Humane Animal Handling

In recent years, consumers around the world have become concerned with animal welfare, both on the farm and at the time of slaughter. Small farmers who raise pastured animals in small family groups prefer to complete the process in animal friendly, safe facilities. The lack of appropriate slaughter facilities and handling equipment for small groups of goats and sheep direct marketed is very apparent and frequently limits the farmer’s ability to sell from farm to customer.

Humane slaughter involves more than a quick, painless death for the animal. Except in rare situations, an instant death for the animal is seldom the issue. Whether the animal is transported from the farm, a commercial feed lot, or even walked to the slaughter facility, as is the case in many countries, the transition has begun from production to processing. At this point, whether the ownership of the animal changes or not, the producer usually gives up control of the process to the trucker, facility handlers and the slaughter workers. If this transition is not handled with high expectations for calm, quality care and processing, the producer’s production standards will be undermined. 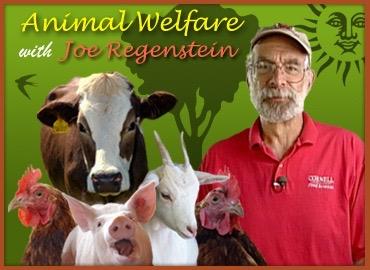 With a grant from the North Central Sustainable Agriculture Research and Education (SARE) we were able to work with Joe Regenstein, Ph.D with oversight provided by Temple Grandin, Ph.D. Dr Regenstein is an international consultant of food production and a professor of Food Science, at Cornell University. Dr. Grandin is a designer of livestock handling facilities and a Professor of Animal Science at Colorado State University in Fort Collins, Colorado and a well-known advocate for humane treatment of livestock.